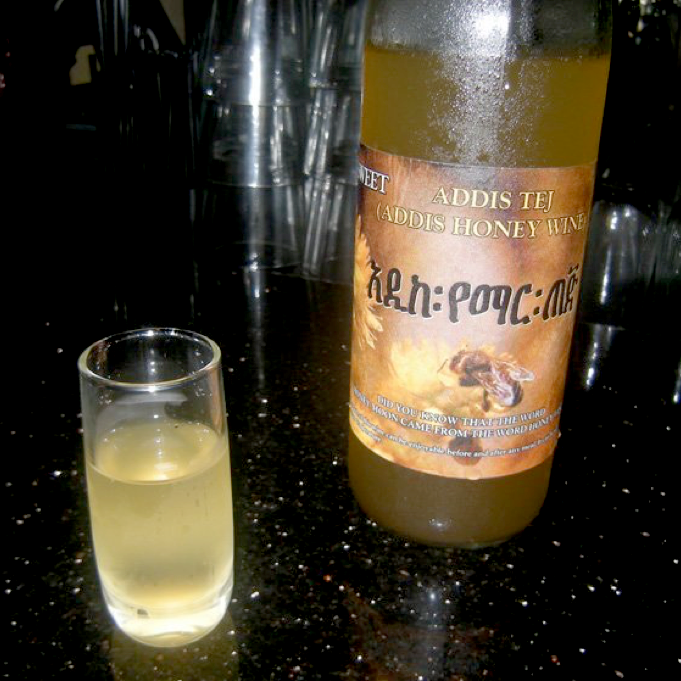 If you thought you loved craft beer, just ask an Ethiopian about tej. A type of honey wine renowned for its spicy-sweetness and potency, the popular drink is as integral to Ethiopian culture as Stone IPA is to San Diego’s.

But Ethiopians have been making tej a lot longer than San Diegans have been drinking beer. Though it’s unclear when it all started, mentions of tej in the region appear as far back as the third century A.D. And while the wine was once reserved for emperors and their cronies, tej is so popular nowadays that it’s considered the East African country’s national drink.

Unlike with beer brewing, you don’t need any fancy equipment to make tej—just a lot of honey and water, a big container and a pile of gesho, a hoppy buckthorn that gives the wine its kick. You can get bags of gesho at Ethiopian shops like Awash Market (2884 El Cajon Blvd. in North Park) and Axum Market (4487 El Cajon Blvd. in City Heights) for as little as $4.

Of course, a number of Ethiopia- and U.S.-based wineries produce tej on a mass scale. But many Ethiopians and tej-loving foreigners prefer to make it themselves. For Harry Kloman, author of the book Mesob Across America: Ethiopian Food in the U.S.A., the home-brewing process is as sweet as tej itself.

“I do it in one-gallon jars in my kitchen, and after about a week-and-a-half to two weeks, you can smell it,” he says. “Every time I walk into my kitchen, I just smell this sweet, pungent aroma of fermentation, and it’s just wonderful.”

Techniques vary slightly, but the brewing process basically boils down to a little mixing, some proper timing and a lot of waiting around. (For detailed instructions, see Kloman’s video) But no two glasses of tej taste the same.

As for winery-made tej, one common brand is Nigest Honey Wine, an Ethiopian import with hints of spiciness, a syrupy aftertaste and a cloudy-brown complexion. Be careful, though, because it’s a rather divisive wine: While one American friend of mine appreciated its earthy flavor, another felt quite the opposite, saying it tastes like cough syrup.
Some Ethiopian tej drinkers are even harsher. When I mentioned Nigest to Yeshume Beru, the owner of Red Sea Ethiopian Restaurant (4717 University Ave. in City Heights), she made a sour expression and said, “That’s not tej.”

When I had a big glass of her personal home brew, the difference was remarkable. Her tej had a deep, golden hue. Little brown specks of what I suppose were gesho floated at the top. With its creamy texture and sumptuous sweetness, it could’ve been a dessert wine, but it contrasted nicely with the food an Ethiopian friend and I were eating, some of which was peppered with berbere, a slow-burning spice mixture.

Alas, due to food-and-beverage regulations, home brew can’t be sold in restaurants. But that isn’t stopping one local restaurant from brewing up its own tej. The owners of Muzita Abssinian Bistro (4651 Park Blvd. in University Heights) have purchased Elsa Winery & Mead in Orange, Calif., and plan to launch a brewery once they obtain the necessary licensing.

In the meantime, Muzita continues to serve the winery’s remaining bottles, which come in two kinds, “mild” and “sweet.” Casual tej tasters might like the sweet kind, which is light, refreshing and faintly reminiscent of white wine.

If you’re game to brew your own tej, though, keep in mind that little things make a difference. Meskerem Bekele, owner of Harar Ethiopian Restaurant (2432 El Cajon Blvd. in North Park)—who makes tej on special occasions—advises against handling spices and onions before making the mixture, lest you contaminate it with foreign flavors. Kloman recommends pouring a little fermented tej into the mix to jump-start the fermenting process.

Ultimately, though, the best advice is to stick to the basics. While some brewers and wineries make fake tej with processed sugar and food coloring, Beru keeps her tej pure.