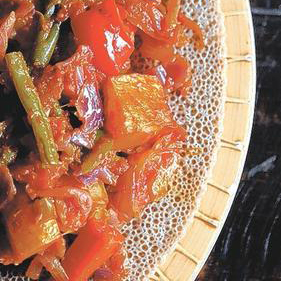 To say Muzita Abyssinian Bistro is a family affair is an understatement.

“My mom runs the kitchen,” said Abel Woldemichael of his mother Letenegus Araya. “My wife and I run the restaurant — the day-to-day operations. We cook in the kitchen, too. If we want to change the menu, we consult my mom because the recipes are hers.”

The Eritrean/Ethiopian bistro in University Heights is named after Woldemichael’s sister, Muzit, who became a quadriplegic 13 years ago from an aneurysm.

“We called her the magnet of our family. She would gather us together and it was always centered around a meal. We wanted to honor her, so we opened the restaurant.”

Woldemichael, also an accountant, is one of four family members who take turns caring for Muzit, who lives with their mother. When asked how he also runs a restaurant and a CPA business, while being a devoted family man with two young children, he chuckled.

“You sleep less,” he said. Then, more seriously, he added: “You have a passion for the things that you do. When we get involved, we’re involved fully.”

The passion to pass on the family’s culture and cuisine is a force behind the bistro.

Woldemichael, who was born in Eritrea, has lived here for more than 20 years. His wife, Yordanos Tesfamichael, was also born there.

“We are very proud of our heritage. We explain the culture and the recipes,” he said. “When we hire people, we look for hospitality and respect for the culture Muzita stands for. That means being open, real and authentic. We train the staff about how everything is made, the history of the restaurant and the spirit of my sister.”

Contributing to the community is also part of that spirit; Woldemichael said they contribute to several fundraising events for local nonprofits throughout the year.

“We could do gift certificates, but we donate our time and the food. Selfless giving is part of our culture. We call it Abyssinian, which is the ancient name of East Africa near the Red Sea. Ethiopian and Eritrean food are similar with slight differences — like north and south Italy.”

Muzita’s touts this slogan: “Throw away the fork and use your hands, the traditional way!” While utensils are available on request, guests are encouraged to scoop up the delicious food with a thin, spongy bread called injera. The menu identifies dishes in the language of Tigrigna with English translation.

“The part of the world we come from is mostly rural,” said Woldemichael. “People grow their own vegetables. There’s also a religious custom of Tsom, twice a week — no eating of meat or dairy products.” Because there’s little refrigeration, he said, meat-based meals are for special occasions with family and friends.

“Vegetarian does not mean taking away meat in our culture. You are not supposed to put meat in these dishes,” he said. “When we were developing the menu, I suddenly realized that the vegetarian items were all vegan except one with clarified spice butter. It’s not something we thought about — culturally, that’s what we eat.”

Woldemichael admits that to many people, stewed vegetables sound boring.

“I know — it sounds like it has no flavor,” he said with a laugh. “But with Alitcha, the main thing is its freshness. We use fresh ginger, fresh carrots, fresh cabbage — everything is fresh. So you can taste the flavors of each vegetable and spice. Even if you decide to use packaged carrots, be sure to use fresh ginger. Fresh ginger gives the aroma people like so much. You cook Alitcha slowly — it’s like layered cooking.”

To accompany the dish, injera is available in certain stores. If that’s not convenient, Woldemichael suggested pita bread or tortillas. He said some people put the Alitcha in a pita and eat it like a sandwich.